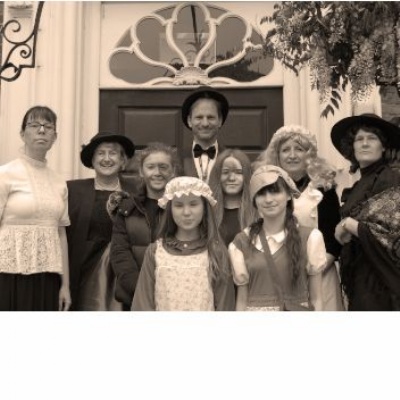 King’s High, Warwick celebrates its 140th Birthday year with a series of events this summer, culminating in the Birthday Weekend on July 6/7, to mark the school’s move – after 140 years on Smith Street – to the stunning new King’s High school building on the Myton Road Campus.

To mark the school’s official birthday this week, King’s held a Victorian Day, to celebrate 140 years of educating girls at King’s, and honour the early pioneers of girls’ education.  Pupils and staff held a day of Lessons, Drills and Deportment, such as girls might have experienced in 1879. Other sessions included cross-stitching and rag curling. Year 8 enjoyed activities on Victorian pharmacy and medicine, overseen by Dr Grist, in billowing robes. In Assembly, girls and staff time-travelled back to Victorian times.  They prayed for Queen Victoria, Prime Minister Disraeli, and British troops fighting in Afghanistan, and learned about the Queen’s interest in the latest technology – the telephone – and London’s new invention, the mobile home. Head of History, Camilla Wellman, re-enacted the role of King’s High’s first Head Mistress, Miss Fisher who, aged 22, opened her school for 22 girls on Smith Street, Warwick.

The school has remained at the forefront of girls’ education ever since, being named the Sunday Times West Midlands Independent Secondary School, 2019. Forthcoming birthday celebrations include the Founders and Benefactors’ Service at St Mary’s, Warwick on Friday, with The Bishop of Warwick, Lord Lieutenant, and High Sheriff; the King’s High and Warwick Prep Art Exhibition in Old Shire Hall on 6 July, and a ‘Come and Sing’ Gala Concert at St Mary’s, Warwick on 7 July, before a ‘Farewell to Smith Street’, when the whole school processes down to their new school on 10 July.