Little Shop of Horrors: the show goes on 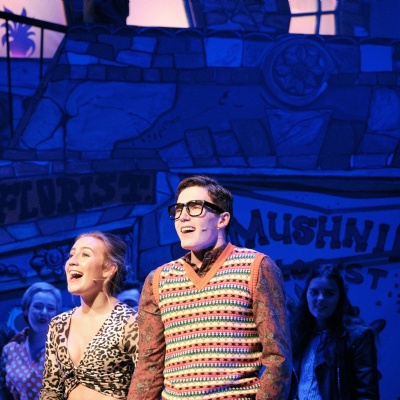 If ever there was a case of the show going on, it was the fizzing, joint King's High/Warwick School production,   Little Shop of Horrors.  When the recent shocking weather forced a performance cancellation, the cast delivered a re-scheduled matinee.  King's High Director of Drama, Cat Price, reports:

‘Over 70 of our talented actors, musicians and technicians brought the charmingly silly Little Shop of Horrors to the Bridge House Theatre. The company worked tirelessly to ensure the tongue-in-cheek narrative of this quirky musical delighted audiences for six shows - and even the flooding couldn't stop us with our re-scheduled Friday matinee performance! The whole process of bringing this show to life has been a lot of fun, but the performances that we produced were beyond my expectations, with the audiences left thoroughly entertained - the buzz in the foyer following the shows was palpable!

Double casting the lead roles provided a lovely sense of supportive competitiveness during rehearsals,  and led the actors to up their game - the entire company produced awesome performances,  from Audrey's stunning vocals (Izzy/Katie), Seymour's endearing geekiness (Sam/Will), the hilarity of both Mushnik (Maya/Leo) and Orin (Ollie/Will) and the smooth yet fearsome voice of the plant, Audrey II (Josh). The audiences were also guided through the show by the energy and beautiful vocals of the urchins (Taryn, Molly, Katie, Beth, Zoe, Molly, Emily and Alex) and were left bedazzled by their numerous costume changes! What allowed the performances to flow so smoothly was the incredible set, designed and built by Ian Roberts and painted so skilfully by Wendy Morris - which captured the comic book feel I wanted for this production and enhanced the tremendous efforts of all those on and behind the stage so brilliantly. It was a delight to work with Sam Young (Musical Director) again - his professionalism and talent knows no bounds and the way he guided our students and the band ensured that the performances were of the highest quality. I could not be prouder of what everyone achieved and I wish to thank the parents for all their wonderful comments of support. I would like to extend a personal thank you to both schools for allowing the re-scheduled performance to take place.'