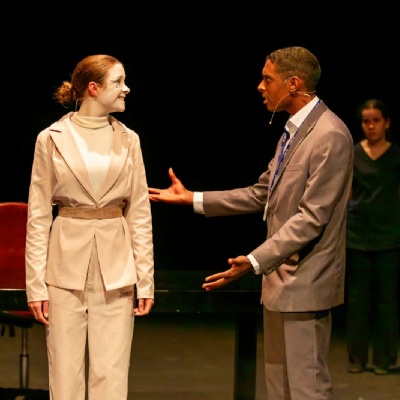 It was wonderful to see the Bridge House Theatre full again for our Senior Production as Everyman took to the stage. To mark this important step it was perhaps apt that it was a new play, or at least a new version of a play, written specifically for us by Adrian Jarvis. Our Everyman is a retelling of the 15th century morality play with original contemporary-styled songs. Set in 2021, it is a hard-hitting and thought-provoking exploration of morality as the protagonist is forced to reflect on the actions they have taken in life and the impact of those decisions.

Adrian Jarvis’ work has been seen before on the BHT stage (Gilgamesh 2017) and this exciting modern ensemble reworking of Everyman was contemporary in both its subject and its styling and fuelled by an electronic score and songs.  Our Everyman was suffering with COVID and facing the choices and relationships of his life; specifically the people he had harmed in pursuit of his own wealth and reputation. Digital screens showed video which accompanied the action on stage and the ensemble switched expertly between roles as diverse as business executives (Robot song), the homeless (Salvation) and even the inside of Everyman’s head (Pulchra, Cretia and co).

The cast were tremendous from the outset, embracing the challenges within the text, offering creative ideas during rehearsals and experimenting with the music that is interwoven into the play. Not only was it an excellent opportunity for our senior students to tackle a different and new text, but it was also delightful to have live theatre return to the Bridge House Theatre. Audiences were moved by the performances, commenting on the emotional content and the way it forced them to personally reflect on their own lives!

Superb solo performances were given throughout, and the result was a tremendously moving, timely and powerful piece of theatre that reminded us all that whatever we believe the need to ‘do good things’ in our lives prevails.

Special mention must go to Taha for his outstanding portrayal of the protagonist Everyman, and to Rose (Pulchra), Hope (Witt), Lottie (Cretia) and Lauren (Bim) for their energetic and vibrant performances, and to the entire cast and crew for their contribution to what was a striking final performance.

A very special mention must go to Ian Roberts who retires in December from his role as Foundation Technical Manager. His creative vision and expertise were evident throughout Everyman in the stunning lighting design and the visually impactful TV screens suspended above the stage which created the world of the play through colourful, eye-catching videos. We are incredibly grateful for all that he has done to support the Drama department and our students, and he will be sorely missed.