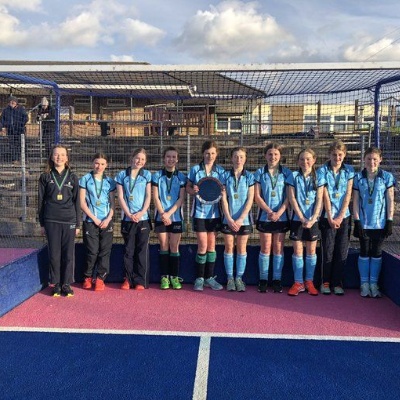 What a week for hockey! Director of Sport, Mrs Parkinson-Mills, recalls the amazing achievements.

"The stand-out performance of the week came from our U13 Hockey team at King's High who, after many hard fought battles, travelled to Chigwell to compete in the Independent Schools Hockey Cup National Plate Final against Wimbledon. The team started strongly, putting the Wimbledon defence under huge amounts of pressure in the first 10 minutes. The opposition stood strong, however, and began to grow into the game. It wasn’t until just before half-time that the deadlock was broken with a great finish from Jenna surging through from centre back.

"Shortly after half-time, Wimbledon converted on of their chances to draw level. The game remained incredibly close right to the end. Just as penalty strokes looked inevitable, we clinched the winner with Jenna slotting home once again after a superb team effort.

"With 45 seconds left to play, the team defended solidly and thoroughly deserve their title of U13 ISHC National Plate Champions 2022. We are very proud of all members of the squad."

Our U15 hockey team then competed at the Olympic Pitches at Lee Valley in London on Wednesday in the ISA National Finals.  Mrs Parkinson-Mills goes into more detail:

"With matches 10 minutes one way it was important to start strongly and the team did just that, recording a 1-0 win in their first group game. A draw and a loss in the other group matches meant we finished second in the group on goal difference, narrowly missing out on progressing to the Championship final. The team were determined to come home with a title and trophy though and played some of their best hockey in the plate semi-final against a team from Ascot.

The score line was 4-0 and the team progressed confidently to the National Plate Final. Despite having possession of all the ball and peppering the Claire's Court Goal it seemed as though the goal was not going to come. With one minute to go though, a swift counter-attack and good movement of the ball saw Hannah slot home what turned out to be the winning goal.

Congratulations to the squad who were crowned ISA National Plate Champions."